Paul Cox was born and brought up in London and he and his family have now returned after some years in rural Sussex. He is delighted to be back - and is essentially a London man. Much of his childhood was spent near Hampstead Heath in North London, he went to Camberwell College of Art and the Royal College of Art in Kensington, and there is hardly an area in the whole city which has escaped his sharp eye and his sketchbook.

He has travelled widely, notably in Jamaica in his childhood, in Italy, Spain and the South of France for various magazines, and is fascinated by the hubbub of New York. It was Blueprint, the architectural magazine, which gave him the first chance to illustrate exotic European and American locations but his work has also been published in most other London and US major newspapers and magazines.

The success of his career as a painter is longstanding. His love of painting and drawing on location has resulted in a large and impressive collection of work. His relationship with the Chris Beetles Gallery in London has been built up over many years and it is Chris Beetles who has sifted through the collection and guided him in this aspect of his career. The 2014 show at the gallery was a huge success, the opening night bristling with friends and collectors, and the show opened with great affection by Paul's one-time tutor at Camberwell, Linda Kitson.

His illustrated books are numerous and all show his ability to describe humour, fun and charm. From Three Men in a Boat and The Wind in the Willows to the 50th anniversary edition of My Family and Other Animals. From Experiences of an Irish RM to 22 books for the Folio Society, most illustrating Jeeves and Wooster. There are children's books, books of poetry and books about wine and cricket.

Paul's journeys around the UK drawing the fine houses and the families who live in them were the subject of a book in which he collaborated with Tim Heald as writer, Honourable Estates, the English and their Country Houses.

His work as a painter of murals has included a large piece at the London College of Surgeons and fifteen very large watercolours for the St Charles Hospital in West London. The sets for the 50th anniversary production of Salad Days in a London theatre were designed by Paul and then hand-painted in the theatre.

He's currently working for various longstanding editorial clients and considering where next to travel. He would also like to find the time to return to painting more of the London streets, markets and characters with which he's so familiar. 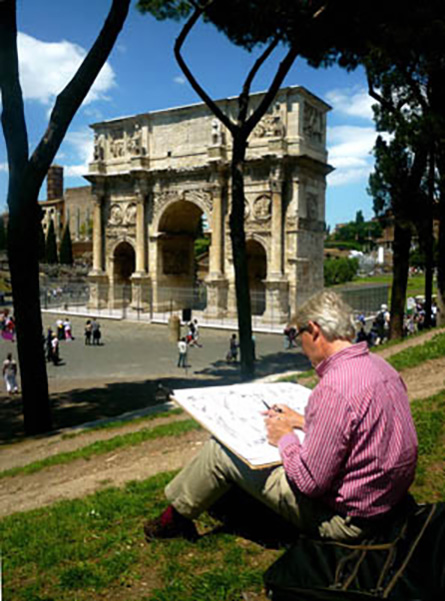