The Art of John Harris - Beyond the Horizon

In 2014 John assembled both recent work and older pieces from the past thirty years and put them together in a collection. This was published by Titan Books in London, and sensitively edited by Omar Khan and designed by Natalie Clay. The result is an elegant insight into John's work and it's published both as a hardback and also in a special limited edition in a slipcase. This is what John had to say about going through the process of looking back at his work and choosing what to put in the book:

"When I was first introduced to science fiction in the early sixties, there was a flavour to the genre, best expressed by people like the late Arthur C. Clarke, Alfred Bester, George R. Stewart and Isaac Asimov. I grew up with their books and their preoccupations became mine. Expansive perspectives, big spaces and bigger questions. The emotional colour that prevailed was, to my eyes, joyous and to this day I am still inspired by the visions of those figures of the past.

"Much of the work in this collection is, undoubtedly 'hard-core' and represents a preoccupation with hardware. But the real meat of these images is the sense of scale, atmosphere and the space which this 'junk' occupies. And of these three elements, hard to separate, there is often a tussle in the artist's mind, as to which is most important. But the one which is most intangible yet most fulfilling, is the sense of atmosphere.

Here in these pieces, often with accompanying sketches, the full display of these elements can be seen. Planetary bodies and vast megalithic structures hang weightless in a vaster space, as if waiting for the Last Trump. The air crackles with expectation and a sense of imminent thunder. This is the stage that is set, recalling, oddly, the Romantic tradition of 19th Century artists. It is a collection of images spanning 35 years or more, and while it reveals an evolution of technique, it remains consistent in a vision that aims to inspire."

Here are the jackets and a handful of the spreads.

To order a copy of the book in the UK you can go to Amazon or to the Titan Books website.

In the US perhaps straight to Amazon.

Here's a review from 'This-is-Cool'. 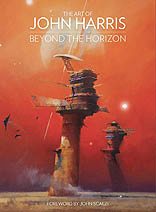 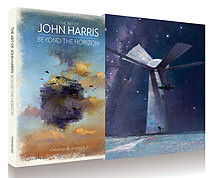 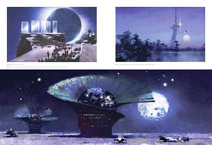 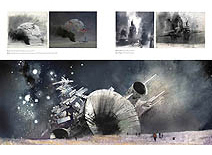