Jim Burns is an acclaimed science-fiction and fantasy artist. Before attending art college in 1968 he had briefly flown in the RAF as a trainee pilot, soloing on jet trainers. However, that career came to naught (not a great pilot!) so he switched to a career in art. His first publishing commission came in 1972 whilst he was still attending St. Martin's School of Art in London.

Using both traditional and digital techniques, his artwork has adorned the covers of many hundreds of novels within the wider genre of the 'fantastical'. He has been awarded 3 Hugos as well as 14 BSFA Awards during his long career. He also worked briefly on the movies 'Blade Runner', 'Chronicles of Riddick' and the cancelled 'Forbidden Planet' remake.

In recent years he has moved away from the world of publishing, creating more personal pieces and also painting to private commission. He still works in the acrylics on primed board technique which has served him well down the decades but is also now using oils on canvas in a very traditional manner, employing techniques such as 'Verdaille' (underpainting) and transparent glazing . . . essentially a Renaissance technique. His work for publishers these days is usually created digitally on a Mac using Photoshop. 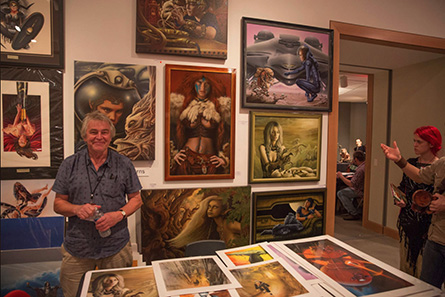